Cardiovascular diseases (CVD) remain a major cause of death worldwide. Evidence suggests that the risk for CVD can increase at the fetal stages due to maternal metabolic diseases, such as gestational diabetes mellitus (GDM) and maternal supraphysiological hypercholesterolemia (MSPH). GDM is a hyperglycemic, inflammatory, and insulin-resistant state that increases plasma levels of free fatty acids and triglycerides, impairs endothelial vascular tone regulation, and due to the increased nutrient transport, exposes the fetus to the altered metabolic conditions of the mother. MSPH involves increased levels of cholesterol (mainly as low-density lipoprotein cholesterol) which also causes endothelial dysfunction and alters nutrient transport to the fetus. Despite that an association has already been established between MSPH and increased CVD risk, however, little is known about the cellular processes underlying this relationship. Our knowledge is further obscured when the simultaneous presentation of MSPH and GDM takes place. In this context, GDM and MSPH may substantially increase fetal CVD risk due to synergistic impairment of placental nutrient transport and endothelial dysfunction. More studies on the separate and/or cumulative role of both processes are warranted to suggest specific treatment options. 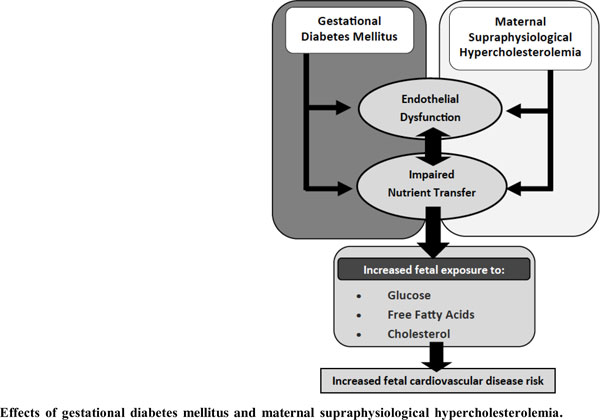