Normal pregnancy is associated with increased insulin resistance as a metabolic adaptation to the nutritional demands of the placenta and fetus, and this is amplified in obese mothers. Insulin resistance is normally compensated for by an adaptive increase in pancreatic β-cell mass together with enhanced glucose-stimulated insulin release. Placentally-derived hormones and growth factors are central to the altered pancreatic morphology and function. A failure of β-cells to undergo adaptive change after the first trimester has been linked with gestational diabetes. In the pregnant mouse, an increase in β-cell replication contributes to a 2-3-fold increase in mass peaking in late gestation, depending on the proliferation of existing β-cells, the differentiation of resident progenitor β-cells, or islet cell transdifferentiation. Using mouse models and human studies placenta- and islet of Langerhans-derived molecules have been identified that are likely to contribute to the metabolic adaptations to pregnancy and whose physiology is altered in the obese, glucose-intolerant mother. Maternal obesity during pregnancy can create a pro-inflammatory environment that can disrupt the response of the β-cells to the endocrine signals of pregnancy and limit the adaptive changes in β-cell mass and function, resulting in an increased risk of gestational diabetes. 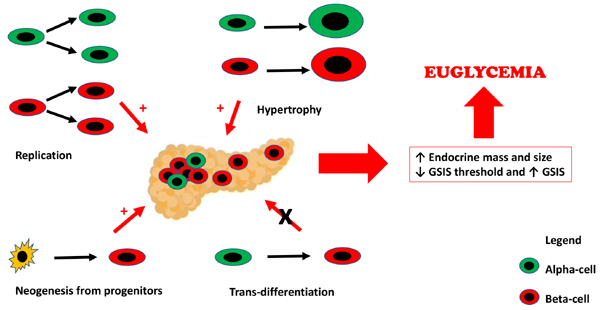