Background: Various antiplatelet drugs are used following Acute Coronary Syndromes (ACS). Of them, adenosine diphosphate receptor P2Y12 inhibitors clopidogrel, prasugrel and ticagrelor are currently used for post-ACS long-term treatment. Although they act on the same receptor, they differ in pharmacodynamics and pharmacokinetics. Several enzymes and transporters involved in the metabolism of P2Y12 inhibitors show genetic variability with functional impact. This includes Pglycoprotein, carboxylesterase 1 and, most notably, CYP2C19 that is important in clopidogrel activation. Common gain-of-function or loss-of-function alleles of CYP2C19 gene are associated with lower or higher platelet reactivity that may impact clinical outcomes of clopidogrel treatment. Prasugrel is considered to be less dependent on CYP2C19 variability as it is also metabolized by other CYP450 isoforms. Some studies, however, showed the relevance of CYP2C19 variants for platelet reactivity during prasugrel treatment as well. Ticagrelor is metabolized mainly by CYP3A4, which does not show functionally relevant genetic variability. Its concentrations may be modified by the variants of Pglycoprotein gene ABCB1. While no substantial difference between the clinical efficacy of prasugrel and ticagrelor has been documented, both of them have been shown to be superior to clopidogrel in post-ACS treatment. This can be partially explained by lower variability at each step of their metabolism. It is probable that factors influencing the pharmacokinetics of both drugs, including genetic factors, may predict the clinical efficacy of antiplatelet treatment in personalized medicine.

Conclusion: We summarize the pharmacokinetics and pharmacogenetics of P2Y12 inhibitors with respect to their clinical effects in post-myocardial infarction treatment. 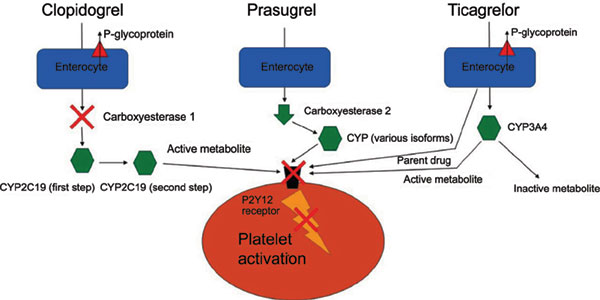