Results: Median (IQR) TG differences in mg/dl were 86 (100) and 46 (60) for LIPOLD and LIPOTEST meals, respectively, whereas the % differences in TGs were 105 (105) and 48 (55), respectively. The differences (in mg/dl and %) between TGs before ingesting the test meal and after 4h were significant for both LIPOLD and LIPOTEST meals (p = 0.003 for mg/dl differences and p = 0.005 for % differences). Patients who had a positive response to the LIPOLD meal (i.e. TGs > 220 mg/dl at 4 h) also had increased postprandial TGs with LIPOTEST. The Homeostasis Model Assessment of Insulin Resistance (HOMA-IR) correlated with TG differences (in mg/dl) following the LIPOLD meal consumption (Spearman's rho = (+) 0.527, p = 0.02). C-peptide correlated with TG differences (in mg/dl) following the LIPOTEST meal consumption (Spearman's rho = (+) 0.538, p = 0.032). There were no differences in TGs and glucose response postprandially in both testing meals according to body mass index (except for TGs between tertile 21.3-24.5 and 25-26.8 kg/m2, p=0.046, in LPOTEST group) and body surface area.

Conclusion: An oral fat tolerance test (OFTT), which contains 75g fat, and represents the everyday habits of Western societies, could provide additional information regarding the postprandial state of the individuals with well-controlled T2DM. The consumption of meals with very high fat content may lead to over diagnosing PPL. TG differences after the consumption of a high fat meal correlated with HOMA-IR. This may be useful to evaluate the role of HOMA-IR in T2DM patients. A standardized the OFTT will help clinicians to better define postprandial TG abnormalities, leading to more appropriate therapeutic options to improve postprandial dysmetabolism. 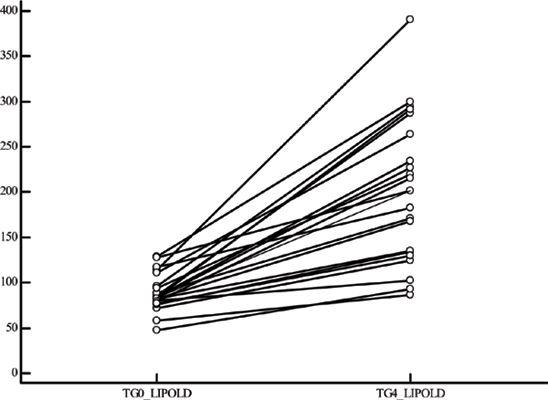