A hypothesis for the role of RECK in angiogenesis


Angiogenesis is a key process by which new capillary blood vessels are formed, sustaining the supply of oxygen and other nutrients to the body allowing its growth and wound healing, among others. However, angiogenesis also associates with pathological processes, such us tumor growth. Vascular endothelial cells produce different matrix remodeling enzymes such as matrix metalloproteinases and a-disintegrin and metalloproteinases, which have both positive and negative effects on angiogenesis, regulating the cell environment and signaling. However, little is known about the regulation of the activity of these proteases during vascular development. Reversion-inducing cysteine-rich protein with Kazal motifs (RECK) is a membrane-anchored inhibitor of different matrix metalloproteinases and a-disintegrin and metalloproteinases, being a critical regulator of extracellular matrix remodeling and signaling pathway, particularly Notch, which is critical for the maturation of the growing vessels. Reck knockout mice die in utero showing vascular developmental defects and massive hemorrhages. These defects were not observed in knockout mice for secreted-soluble matrix metalloproteinase inhibitors pointing to an exclusive role of RECK in vascular development and maturation since its location at the plasma membrane. Despite the above, the exact role of RECK in this process has not been clarified. This review is focused to summarize the available information on the role of RECK as membrane anchored matrix metalloproteinases and a-disintegrin and metalloproteinases inhibitor, proposing a hypothesis by which RECK play key roles in the physiology and pathophysiology of the angiogenesis processes. 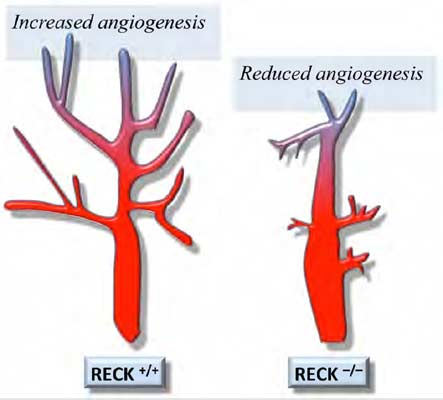