The Role of microRNA-126 in Vascular Homeostasis


MicroRNAs are negative regulators of gene expression that have been shown to be essential elements in the coordination of complex regulatory pathways. One of these short non-coding RNAs, microRNA-126, is highly enriched in the vascular endothelium and was shown to play distinct roles in angiogenesis, vasculogenesis and endothelial inflammation. Abrogation of this microRNA leads to severe complications in the response in vascular development as well as vital repair mechanisms carried out by endothelial cells. Interestingly, recent data suggest that the homeostatic role of microRNA-126 may reach far beyond its endothelial functions as this microRNA was also found to be present in cells of the hematopoietic system and in microvesicles or ‘free-form’ in the periphery. MicroRNA-126 is controlling the fate and/or function of a variety of cells differentiating from the hematopoietic lineage, including megakaryocytes and erythrocytes. Recent studies identified circulating microRNA-126 as a biomarker for myocardial injury and vascular damage in diabetes. Furthermore, reports have suggested a protective role of circulating microRNA-126 in murine models of organ ischemia. Here, we review current insights in the role of microRNA-126 in vascular homeostasis and conclude that this microRNA may serve to integrate and facilitate both local as well as systemic functions in vascular maintenance and repair. 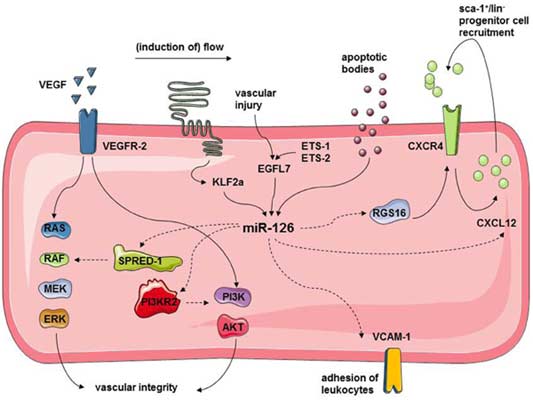